James Boyd, a Freedman Academy student for the last six years, is the inaugural winner of the Leep Family Foundation Scholarship. The scholarship, worth $10,000 annually for four years, is given to an African-American youth who, in the words of donor Mike Leep Jr., has been “touched” by the programs of the 100 Black Men of Greater South Bend. 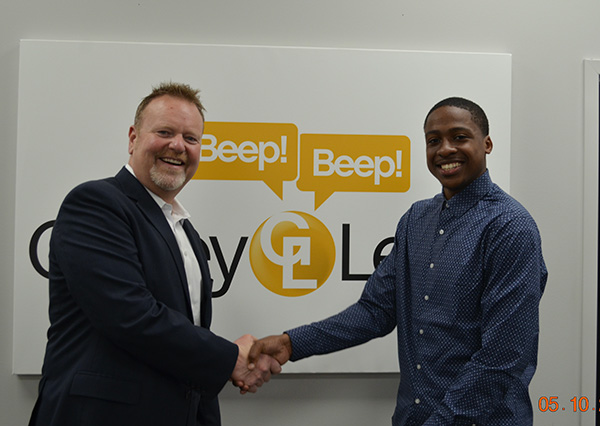 James Boyd, who began attending Freedman Academy when he was in seventh grade, is now a senior at Riley High School. Because of his academic accomplishments and his athletic prowess, he attracted attention from several colleges and universities. In the end, he chose Kentucky State University, an historically black institution in Frankfort, KY. He intends to major in business and engineering and hopes to play football.

James was the unanimous selection of the 100 members who work in the Freedman Academy. He is the personal mentee of Dr. Alfred Guillaume, who helped him craft an essay in support of his application for the scholarship.

James became familiar to everyone associated with the academy for his standard response when asked what he wants to do when he grows up: “I want to be an engineer, an architect, a scientist and an entrepreneur.”

Mike Leep Jr. gave James his personal thumbs-up after they met on Friday, April 28, at the corporate offices of Gurley Leep Automotive Group. They spent more than half an hour discussing James’ academic background and sports interests and Leep’s commitment to education.

Leep reminded James that he would be the first of ten young black men to receive the Leep Family Scholarship and emphasized the responsibility of opening the way for others.

The 100 commends James Boyd for his achievements. And we honor Mike Leep Jr. and the Leep family for their commitment to our programs and the education of our youth.

MARTIN NAMED TO THE CHAMBER'S "FORTY UNDER 40"

MOVING ON UP: 100 MEMBERS ADVANCE