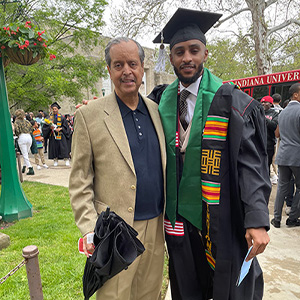 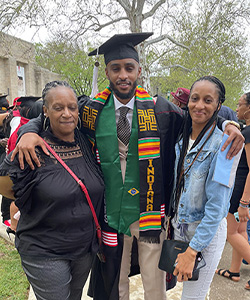 Da'Qwan with his mother and grandmotherThis month, four years after that, Da’Qwan stood among the capped and gowned throng at Indiana University-Bloomington and received his bachelor’s degree in journalism—an achievement witnessed by his family and his Freedman Academy mentor, Seymour “Sy” Barker.

Da’Qwan has become the latest success story of the 100 Black Men of Greater South Bend, a shining example of what mentoring can mean in the life of a young black man.

“Mr. Barker has meant so much to my journey of growth by making sure my potential was never lessened,” Da’Qwan said recently. “Anything I wanted to do or wanted to pursue, Mr. Barker made sure I received the best experience and helped connect me with wonderful people along the way. His mark on my life kept my vision clear, and he was more of a father figure than I could ever ask for, especially with my real father being absent the majority of my life.”

Da’Qwan was a speaker at the 100’s tenth anniversary gala in 2019 and, barring an unresolvable conflict, likely will speak at this year’s gala.

Next step for Da’Qwan is to put his new degree to work for him in sports journalism. He already has an offer from a new digital sports publication, but is hoping for additional offers. He hopes that networking through the 100 can help him as he starts his career.

Congratulations, Da’Qwan. We are proud of you.